The history of Chichen Itza can be traced back to the classic period of Mayan civilization , running between 250 BC through AD 850. Geographically, it ranged from Mexico through Guatemala, Belize, Honduras and El Salvador.

During the first millennium AD, the Mayans reached levels of civilization rivalling those of ancient Egypt, Greece and Rome.

They were superb astronomers, architect/builders, athletes and mathematicians.

But for some unfathomable reason they never discovered the wheel.

In times when Chichen Itza flourished as a city, the Mayas formed a highly sophisticated society. Their elite did remarkable work in astronomy, mathematics, engineering and architecture, while the rest provided manpower to execute the plans. 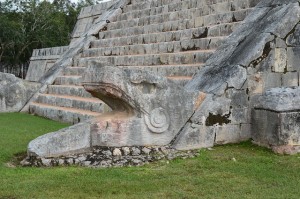 Largest of Mayan cities, Chichen Itza was started around 400 A.D., abandoned and returned to several times before the Toltecs arrived in 987 A.D.

The aggressive Toltecs conquered the Itzas, introduced them to the practice of human sacrifice and with their labor rebuilt the city as a religious centre.

Everyone moved out by the thirteenth century, so when the Spaniards came in the 1500s they found crumbling buildings being devoured by the greedy jungle.

A New York lawyer rediscovered them in 1842, following which an influx of amateur archeologists destroyed some.

Real restoration and reconstruction by the Carnegie Institute and Mexican government was begun in 1922, and continued for 20 years.