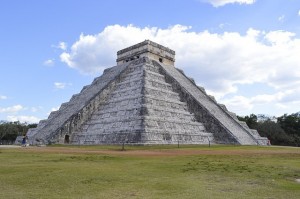 Ball games were played throughout Mesoamerica in pre-Columbian times. Prominent centres such as El Tajin or Chichen Itza had more than 10 courts.

Although size and layout varied, most Maya courts had a central playing alley with a smooth surface that was bordered on its long sides by stone platforms.

The platforms often had buildings on top, but their identifying features were the inclined, horizontal, and vertical planes that faced the playing alley and served as surfaces against which players bounced a rubber ball.

No Maya text remains to explain the rules of the game, but it is known that among Maya kings and nobles, the ball game had ritual significance and was associated with warfare; the depiction of a decapitated player in the ball court at Chichen Itza suggests that in some competitions warriors lost their lives.

The rules of ball games still played today in Mexico, as well as ancient depictions in pottery and stone, and information from the Spanish conquest tell us something about the game.

It was played by two teams of one to eight players who competed on either side of a central line that was clearly marked by stone discs (set in the playing alley) or by sculptures or rings set in the vertical sides of the bordering platforms.

Each team tried to keep the ball in play by hitting it across the central line. The ball could be shot high in the air, bounced against the sides of the platforms or rolled along the alley floor.

Points were awarded to one team when the other failed to keep the ball in play, as in volleyball.

Unlike football or rugby, points (goals) were not scored if the ball landed in an end zone (in fact, this caused a penalty). Depictions on Maya pottery vessels show men using their bodies, arms and hips to drive the ball.

Players’ torsos, knees and arms were heavily padded, although kneepads were worn only on one leg. Rubber balls were not filled with air in those days but probably with fibre, or they may have been made of layers of rubber.

Nobles wear elaborate headdresses in paintings of the game on pottery, but it is hard to believe that these could have stayed in place during a game.